The mission of the SMBAA is to enhance the academic, professional and social experience of the Members by providing a good networking environment and coordinating all member-run activities. 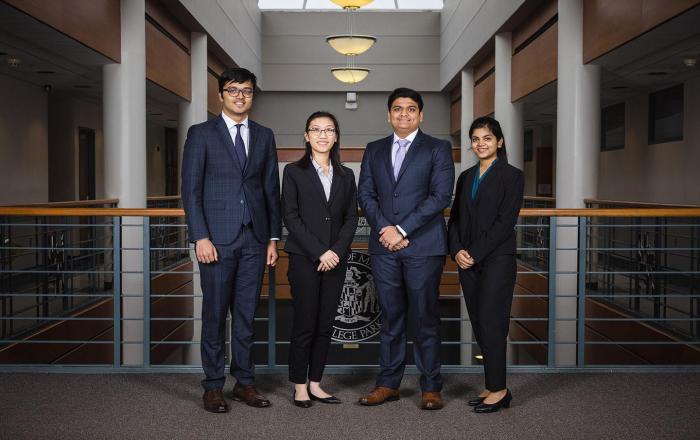 The mission of the SMBAA is to enhance the academic, professional and social experience of the Members by providing a good networking environment and coordinating all member-run activities.

The SMBAA is charged with, but not limited to:
1. Promoting and enhancing the reputation of the Robert H. Smith Masters Business Analytics program;
2. Enhancing the educational experience and professional development of all Members;
3. Providing a platform for Corporate interaction and gaining practical analytics experience;
4. Adding value to the program by coordinating member-run events and activities.

The SMBAA understands and is committed to fulfilling its responsibilities of abiding by University of Maryland policies.

Membership of the SMBAA shall be open to any Smith Master Student who has fulfilled necessary obligation to be members of the SMSA. The Membership would be of two categories –
1. Members from the Business Analytics cohort, who will be accorded “Full Membership”.
2. Members of other Masters programs, who will be accorded “Guest Membership”.
Guest Membership will have to be obtained through one window of two weeks per semester that shall be opened for all Masters Students. The Guest Membership will be valid for the semester that the student registered. The SMBAA does not restrict membership or discriminate on the basis of race, color, creed, sex, sexual orientation, gender identity, gender expression, marital status, personal appearance, age, national origin, political affiliation, physical or mental disability, or on the basis of rights secured by the First Amendment of the United States Constitution.

Ambassadors are Full Members who are interested in securing a position as an SMBAA officer for the next SMBAA election. The number of Ambassadors should not exceed fifteen percent of the First-Year Full Members or a count of 20, whichever is higher. All Ambassadors must be currently enrolled students. The term of Ambassadors will be three months—from September to December.

Voting Eligibility: Students who have voting rights are those members meeting the requirements of Full membership, as stated in Article III.

Election Process - Ambassadors: At the beginning of each new academic year (in August and September), current SMBAA Officers will recruit new SMBAA Ambassadors, when SMBAA Officers email all First Year Full Members with instructions on how to apply to be an Ambassador. This shall happen within the first two weeks from the end of orientation. In case of the number of applicants being more than twice the maximum number of Ambassadors possible, the applicants will be screened to twice the maximum number of Ambassadors, by the Board, based on their profiles. All screened applicants shall be given an opportunity to address all Full Members in person for no longer 2 minutes each. All Full members will vote through secret ballot, with specifics being decided by the Board. The votes shall be counted, and the Ambassadors declared. Once selected as an Ambassador, they will start to take responsibilities of planning and implementing activities on behalf of SMBAA, with the guidance of the current Officers.

Termination or Resignation of Officers - Any SMBAA officer may be terminated if any of the following conditions are met, and with a consensus vote from other current Officers:
1. An Officer has won the general election, but fails to fulfill his/her duties.
2. An Officer has made severe mistakes which caused serious consequences, has violated University of Maryland regulations and rules or has broken the State or Federal Laws.
3. An Officer who does not attend three meetings consecutively, after receiving written warning.
Officers who wish to resign must do so by submitting a written resignation request to the Officers, then receiving a majority vote from other current Officers. In case of a motion to terminate, the Officer moving the motion and against whom the motion is presented will be excluded from the vote. Motion to terminate requires presence of all Officers.
When a SMBAA Officer position is left vacant by a termination or resignation, the remaining SMBAA Officers may select a new officer with a majority vote by remaining Officers. In case of a tie, a Full Member will be randomly selected to cast the deciding vote.

Meetings - SMBAA will host at least one meeting per semester for all SMBAA members, at a place selected by the Board. Officers of SMSA will have regular meetings (ideally once a week) at a time and
location mutually convenient to current Officers.

Constitution revisions can be made only once a year and may not be made from the beginning of fall semester through the end of the Officer Election process. A revision of the Constitution requires the following steps:
1. Proposal: Amendment(s) to the constitution must be proposed in writing by any Full member of the SMBAA at any Board meeting at which all the Officers are present. Every officer should receive a copy of proposal draft at least two days prior to the meeting. Once a simple majority approved the draft, an official amendment draft should be written
after the meeting for public announcement and voting process.
2. Voting: All Full Members will vote on the Amendment and the Amendment is passed if and only if:
o A minimum of 1/6th of the Full Members vote for the Amendment to pass.
o A majority votes for the Amendment to be passed.