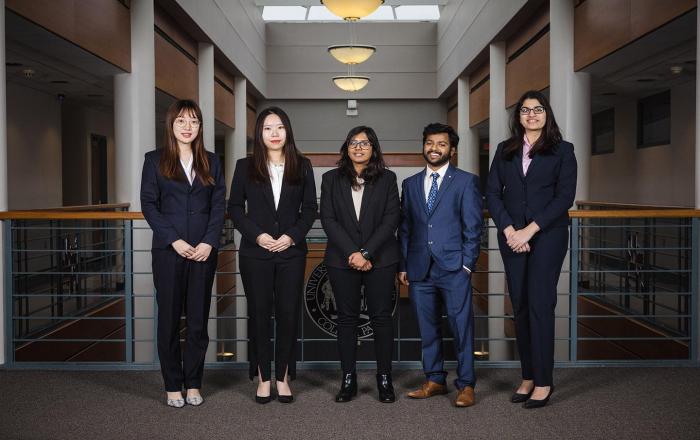 We, the members of the Smith Peers, to maximize the value of Robert H. Smith community and enhance the overall experience of graduate students, establish this constitution.

The organization is aim to facilitate the graduate students in the R.H. Smith School of Business to explore their career opportunity and enhance their professional and social experience by establishing an effective coaching and networking environment. The club is in charge of, but not limited to:

The organization shall not restrict membership or discriminate on the basis of race, color, creed, sex, sexual orientation, gender identity, gender expression, marital status, personal appearance, age, national origin, political affiliation, physical or mental disability, or on the basis of rights secured by the First Amendment of the United States Constitution.

1. The President will be in charge of all the board meetings and setting the strategic plans for the organization. In addition, any decisions made by the President should be agreed upon by more than a simple majority of the board.

2. Vice President of Finance has the responsibility of making budget, handling all incomes and expenditures of the Club, and presenting the annual report of the club to all members. Any Funding issues should be discussed and decided by the whole board.

3. Vice Presidents of Event will be responsible for logistics of event, coordinating each department, making event plans, and presenting event review to the board.

Standing Committees will include:

Ambassadors are students that are interested in securing a position as an SP officer for the next SP election. The number of Ambassadors shall be around 30-50 Specialty Masters students. All Ambassadors must be currently enrolled students. The term of Ambassadors will be three months - from September to December.

At the beginning of each new academic year (in the end of September or the beginning of October), current SP Officers will recruit new SP Ambassadors, when SP Officers email all Specialty Masters students with instructions on how to apply to be an Ambassador. SP Officers will interview all individuals interested and eligible to serve as Ambassadors, and select the most qualified and appropriate students, based on SP’s strategic goals. Once selected as an Ambassador, they will start to take responsibilities of planning and implementing activities on behalf of SP, with the guidance of the current Officers.

Interviews for nominees will be held by mid-November annually. Officer positions will be determined by a majority vote of the Nominating Committee. The voting will be via an anonymous electronic ballot and the results will be shown publicly to all members of SP.

Termination or Resignation of Officers

Any SP officer may be terminated if any of the following conditions are met, and with a consensus vote from other current Officers:

Officers who wish to resign must do so by submitting a written resignation request to the Officers, then receiving a consensus vote from other current Officers.

When a SP Officer position is left vacant by a termination or resignation, the remaining SP Officers may select a new officer with a majority vote by remaining Officers.

SP will host at least one meeting per semester for all SP members, at a place selected by the Board. Officers of SP will have regular meetings (ideally once a week) at a time and location mutually convenient to current Officers.

Constitution revisions can be made only once a year and may not be made from the beginning of fall semester through the end of the Officer Election process. A revision of the constitution must be proposed in writing by any SP officer at any Board meeting at which over two-thirds (2/3) of the Officers are present. Every officer should receive a copy of proposal draft at least two days prior to the meeting. Once a simple majority approved the draft, an official Amendment should be written after meeting for public announcement immediately.